Trip to the Dudhsagar Falls Spice Plantation and Old Goa

If you ask Google or Yandex about the waterfalls of India, the first pictures that pop up are of the Dudhsagar falls: arched arches of the railway bridge and flowing towards it streams of water from a huge height. For three years we admired only the photographs of this natural miracle, and now it’s time to experience it live.

How to get to Dudhsagar waterfall?

Dudhsagar waterfall is located in South Goa in the foothills of Western Ghats on the border of Karnataka, about 120 kms from Arambol. There are several transport options from Arambol to the Dudhsagar waterfall. There is only one thing in common: in any case, you have to first reach the city of Collem. Jeeps start from there and takes you to the foot of the waterfall. Further about the capacity of jeeps and cost, I have given details below.

So, we reached Collem. After reaching you need to stand in the line for jeeps. If you come on your own, you’ll have to stand in line, if you have come with a tour or a taxi, then all formalities will be fulfilled by them.

How much Dudhsagar Falls trip cost ?

The cost of the trip varies significantly depending on how you will get to the Dudhsagar waterfall. The Jeep costs 2,800 rupees. There are 7 seats in the jeep, i.e. 400 rupees per person. You can go with a small group as well, then the price per person will be higher.

In addition to the jeep, you also need to pay for the life jacket (30 rupees). The life jacket is paid in any case, even if you do not intend to use it. Usually they are simply folded under the seats in a jeep and you do not have to carry them to the waterfall, of course, if you can swim. If you still took a life jacket with you, watch him both, or else they’ll take you straight from under your nose.

Entrance tickets to the Dudhsagar waterfall cost 50 rupees per person, they are paid separately at the checkpoint. To do this, the money is previously given to the driver of the jeep, who will pay.

In the same place you will be asked if there is a camera. Using the camera (a separate camera, not in the phone) costs another Rs. 50 for the device. Thus, a visit to the Dudhsagar waterfall will cost a minimum of 480 rupees per person. Better to Book a Dudhsagar Falls Tour Packages from a good Travel Company.

Jeep Safari to the Falls: At the very walk from the parking lot of jeeps to the lake stands out 1.5 hours and, in my opinion, quite long. At first the path is very simple, but the last third of the way to the lake may seem quite complicated for older people.

On the way to the Dudhsagar Falls you can meet and feed the monkeys, although the information posters strongly recommend not to do it.

The descent to the lake is very slippery and one must be very, very cautious. In the lake fish swim, which can be fed from the shore, which doubly complicates the descent into it. The water is cold and crystal clear – just right after the sun invigorates!

Usually everyone is advised to come as early as possible, we were at the Colem at 8 am and still had to spend more than an hour in the queue for the jeep. But when we returned from the waterfall, the people were almost gone.

Therefore, the idea came to our mind that it is better to go to Dudhsagar by 12 or much later than that. The rush is less and you can enjoy some privacy.

In addition, the waterfall Dudhsagar is still better to go immediately after the end of the rainy season, when you can see it in all its might. Now as well it is quite magnificent, but day by day its stream becomes weak and less water flows. It is better to visit after rainy season to watch the gush of white water flowing. Summarizing, I can say that we liked the waterfall and we can safely recommend it for a visit, but it would be worthwhile to work on organizing the very process of visiting it.

At the Dudhsagar waterfall, we went by taxi, so after his visit we went to the plantation of spices.

Entrance ticket: Rs 400 per person, excursion and lunch included in the price.

During the tour you can get acquainted not only with local spices, but also hear about varieties of bananas, pineapples and other fruits, learn how to make fen and taste it.

After the tour, you can buy various spices and Ayurvedic preparations made from the plants grown here.

In addition to the excursion to the plantation of spices Sahakari Spice Farms you can get acquainted with Indian elephants and learn that the elephant is “not a horse, a camel or a donkey” . Elephant rates on the photo below: 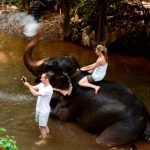 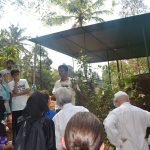 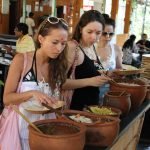 The tour is quite interesting, and we can even say that we liked it, but if we take the price-quality ratio, then, in my opinion, 400 rupees is a bit too much.

This is not the first and certainly not our last trip to Old Goa . A detailed account of the visit to Old Goa and its history can be found in our post Notes on Old Goa. Visiting Old Goa as part of this tour usually involves visiting two of its most famous churches: the Basilica of Bom Jesus and the Church of St. Catherine .

But if there is a desire, I would recommend to see the ruins of the monastery of St. Augustine .

The whole trip to the Dudhsagar waterfall with a guided tour at the spice plantation at Sahakari Spice Farms and in Old Goa took us almost 13 hours. The money turned out about 2,000 rupees per person.

Will we go again? Yes, we want to see the waterfalls again in all its power. We want to cross the bridge under which the stream flows. And ofcourse the spice plantation and Old Goa too.